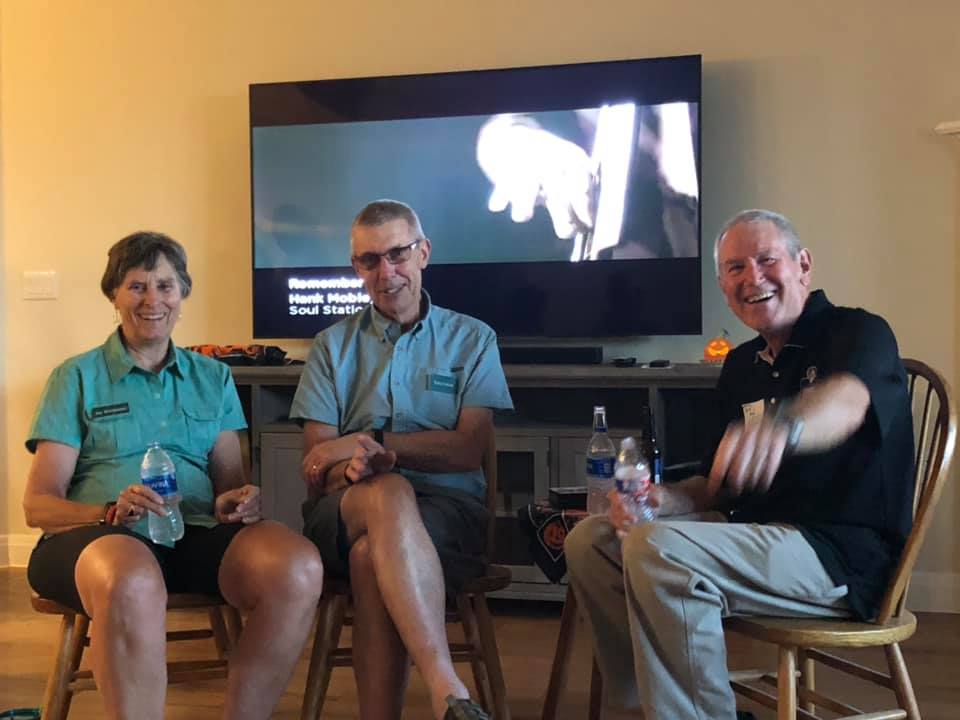 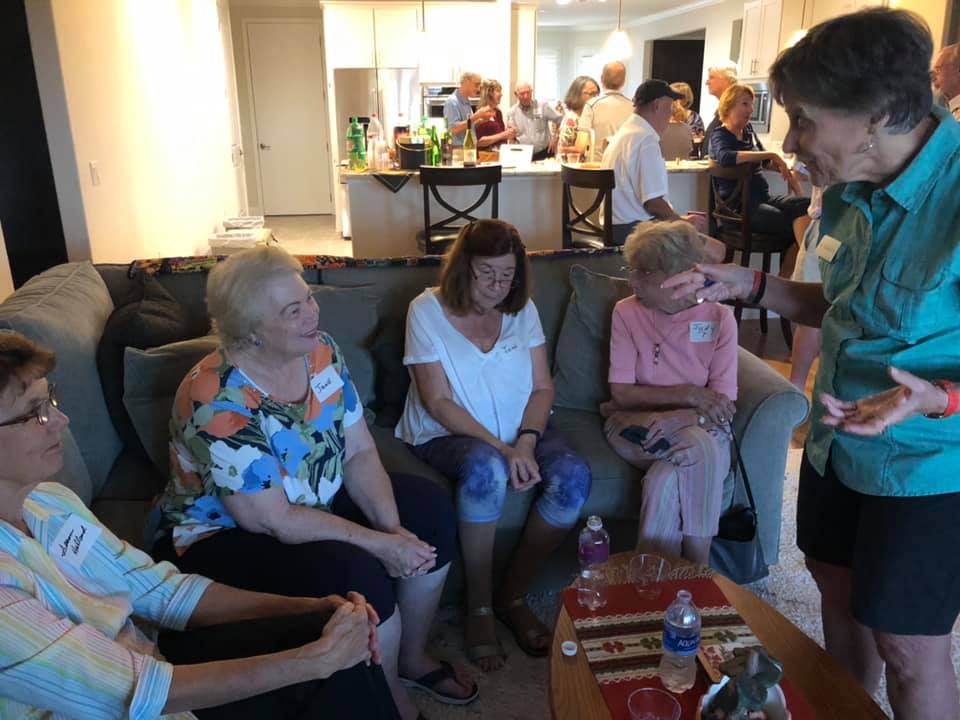 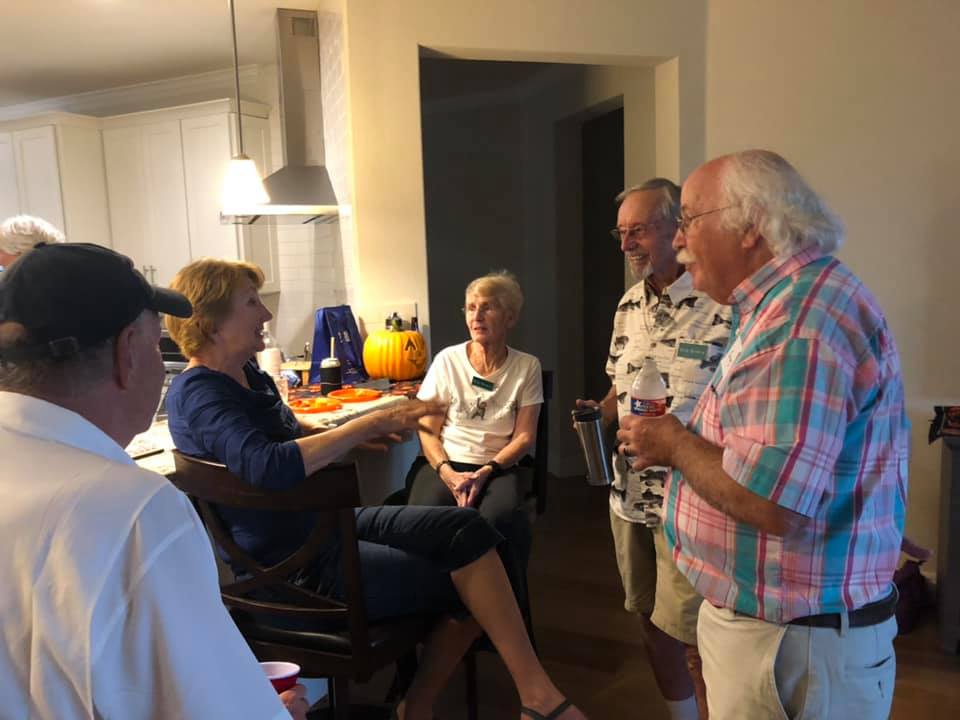 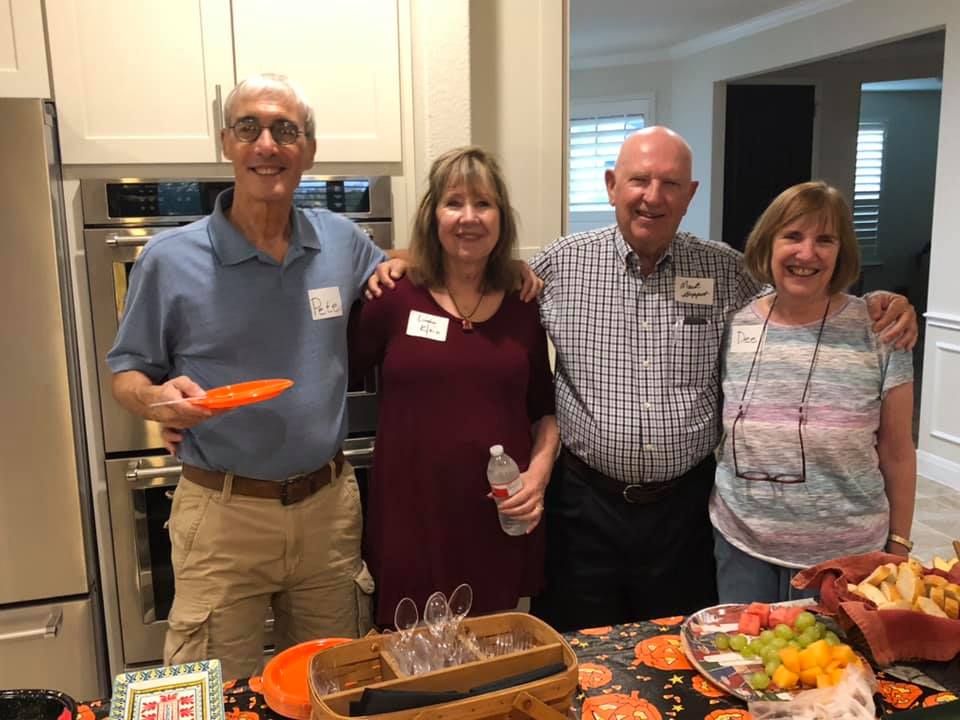 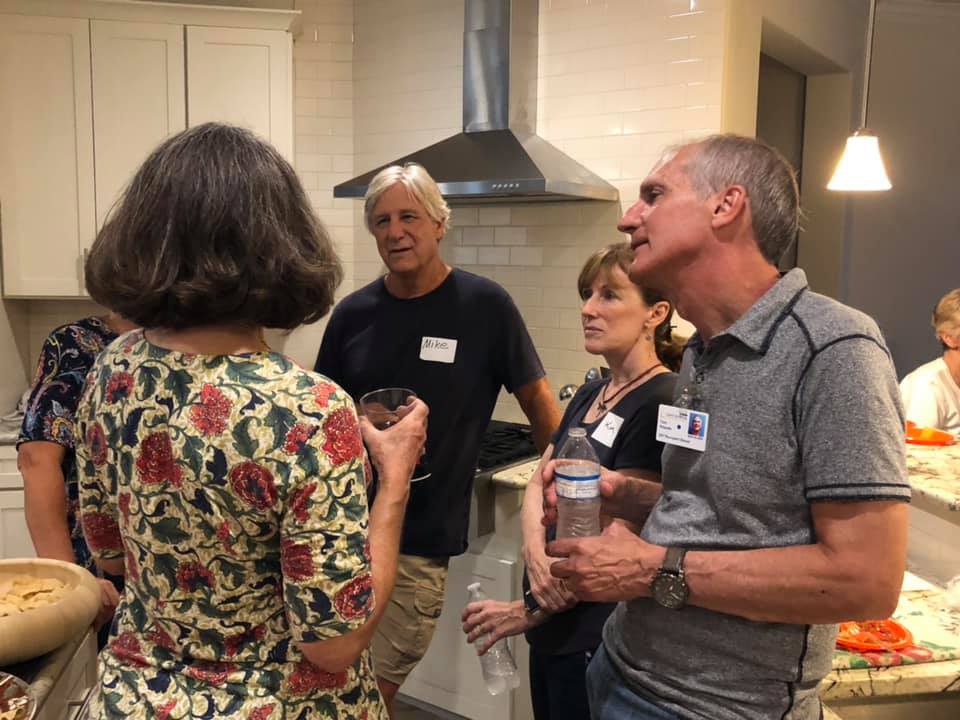 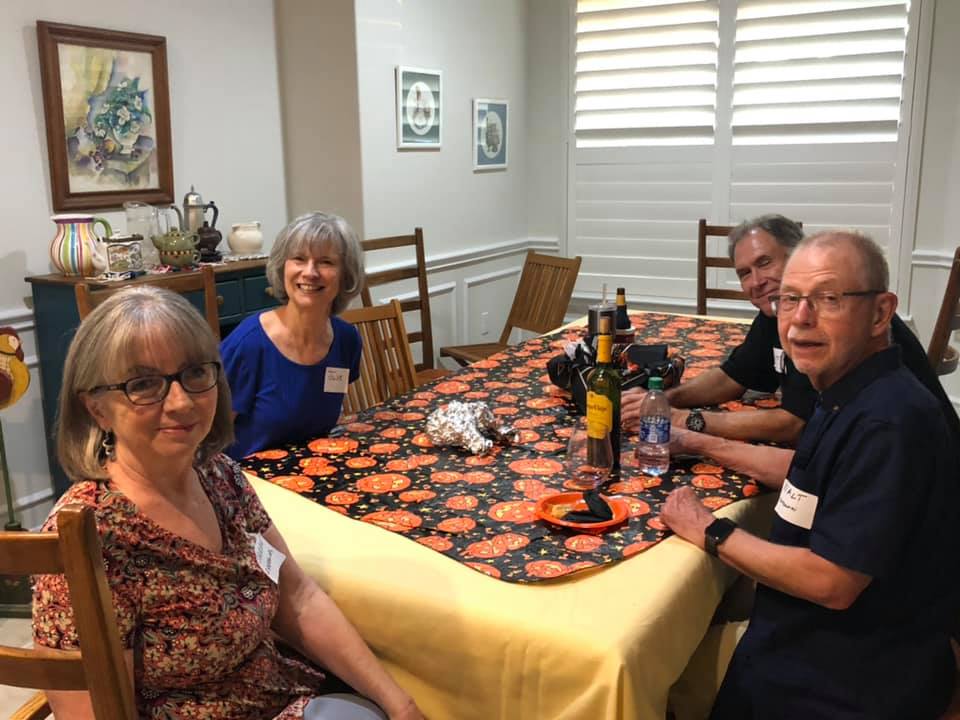 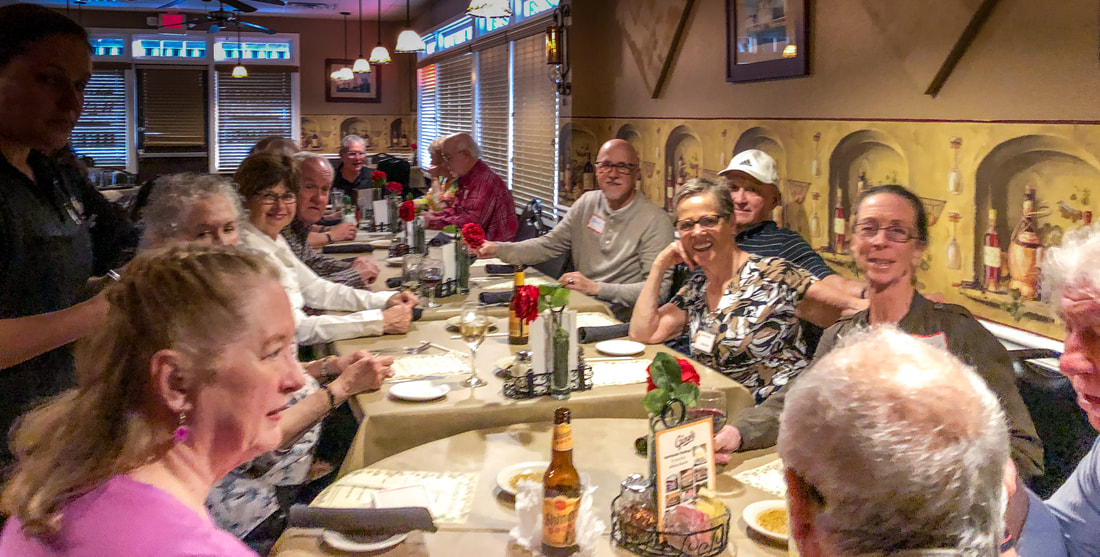 The Club provided the main meal with members bringing side dishes and desserts to Cowan Creek's ballrooms. We gave out many, many door prizes and announced the new officers. We also awarded those who met their Goal Setters Mileage for 2017. The rider with most mileage was Steve Roberts.
Photos of the 2018 Holiday Party 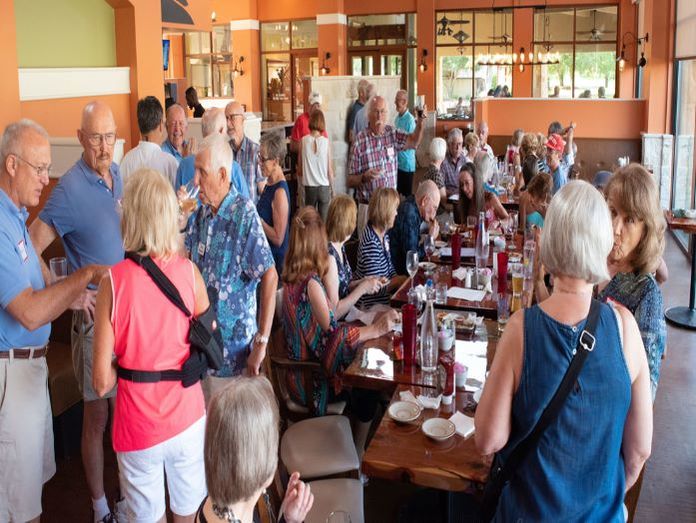 September 25th - Sun City Cyclists celebrated summer’s end at our newest restaurant Mulligan’s. About 50 folks showed up to enjoy great appetizers and bargain priced drinks. Once a bit cooler, we’ll try out on their patio! Plans are to grab lunch at Mulligan’s on a regular basis. More info to follow. 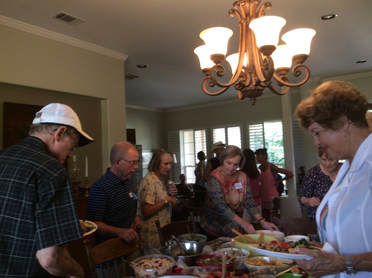 On July 8th, around 45 folks gathered to share Sunday Summer Salads and desserts. Doug smoked a yummy pork to share. Weather was only in the 90's so folks could hang out on the back porch.

On May 2nd, Sun City Cyclists had an appreciation celebration for all the many Sun City Cyclists who volunteered at the Red Poppy Ride. The Club and Cindy provided the brisket and sides for an outdoor feast at the Brewery.
Locally brewed beers were available for purchase.  Greg Hughes brought some t-shirts from Red Poppy to share - thx! 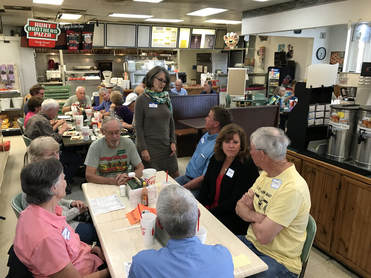 ​Most of us have enjoyed a cup of coffee at the Weir Country Store on a morning ride.  On March 19th, they served up the best Pitt BBQ, homemade burgers and sweet potato fries.  We took up most of the cafe for an early supper with lots of visiting.

​January 2018
Social & Dinner at Gino's Italian Restaurant in Round Rock
​

The Club provided the main meal with members bringing side dishes and desserts to Cowan Creek's ballrooms. We gave out many, many door prizes and announced the new officers. We also awarded those who met their Goal Setters Mileage for 2017. The rider with most mileage was Steve Roberts.
Photos of 2017 Christmas Party 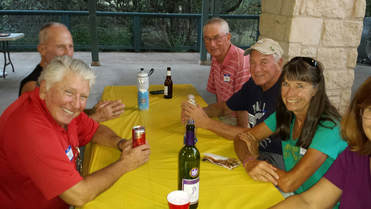 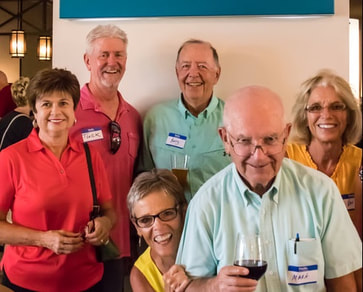 The Club came out for a happy 90 minutes at the new Sheraton Hotel's bar. To encourage our attendance, the hotel offered a half price deal on drinks and pub food. Good negotiating, Bev.
​Turn out was great!

The Club was hosted by Dave and Cindy Graham in their gorgeous backyard with lots of shade trees. Dave grilled up some chicken that Cindy had marinaded - the combination was to die for! Folks brought lawn chairs and beverages, plus a side dish to share. 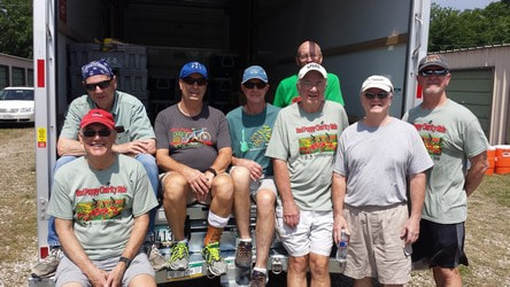 The Club supported the City of Georgetown in celebrating the Red Poppy Festival by helping with the Bike Ride registration, stocking the bicycle routes with refreshments for the riders, and celebrating the success of the event.
We celebrated by holding a picnic at Legacy Hills Pavilion on May 3.
The total amount earned from Red Poppy in 2017 was $32,000. Thanks especially to Greg Hughes for his tremendous effort.
Powered by